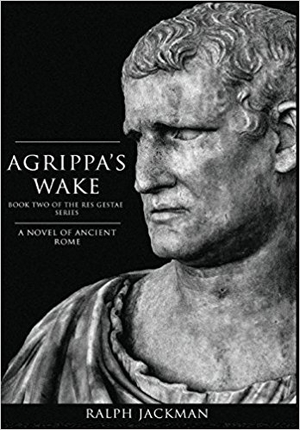 Agrippa’s Wake is Ralph Jackman’s sequel to his novel Actium’s Wake. The first book traced the career of Roman senator and soldier Marcus Rutilus Crispus through the naval victory but personal defeat at the battle of Actium, following the action to Egypt under Anthony and Cleopatra, all the while showing the personal decline of Crispus, due to his personal enmity with the new emperor Octavian. The sequel opens with Crispus staring at his own gravestone. Too cowardly to commit suicide, it turns out he has faked his death, and he slowly makes his way back to Rome, and assuming a false name begins to build his reputation and take his revenge. He starts by rescuing his lover and former slave, Whisper, from marriage to a cruel man, and rebuilding his lost fortune from treasure he managed to store away in a temple to the goddess Fides. With a woman at his side and money at his command once more, he sets out to rebuild himself by turning to the one honorable man left in the empire, Agrippa – Octavius’ right hand man. Although Agrippa realizes that Crispus has been unfairly accused, he also must balance his loyalty to Octavius with his sense of honor. To manage these competing claims he sends Crispus and Whisper off on an official errand, and the high drama of the previous novel starts again.

Jackman’s style is highly exciting and entertaining, but is clearly one of historical fiction, and readers who are sticklers for history will likely want to steer clear of this tale, despite the use of some actual historical figures. Readers who are looking for a good adventure story, regardless of setting or historical outcome will likely enjoy this novel more. Jackman does an excellent job of weaving together the different aspects of historical fiction, evoking the exoticism of Roman and the ancient world of the Mediterranean, a poignant love story with a beautiful woman, which also has just enough fighting and insecurity to feel real, and situations of desperation and danger that would fit nicely in any Hollywood blockbuster. The first novel had the advantage of being based around events that are well known to even the most casual reader of Roman history – the battle of Actium and Marc Antony’s subsequent defeat, followed by the suicide of Cleopatra. This follow up suffers slightly by focusing on the character Agrippa, who is likely merely a name (if that) to most readers with a casual knowledge of Roman history. Also, Agrippa, unlike Antony and Cleopatra who go down in a blaze of glory, lives a long and fruitful life and dies an old man. This means that the sequel relies more heavily on Jackman’s invented characters. These characters, while familiar to readers of the first book, are slightly two-dimensional, and have a fairly limited set of reactions that makes some parts of the book feel predictable. Overall, Jackman has produced another rollicking adventure story, which will appeal to readers who love historical fiction. It’s not the next Great American novel, but it is more than enough to keep readers entertained at the beach or on the elliptical machine at the gym, especially readers who like a fast paced adventure novel with just a dash of romance.