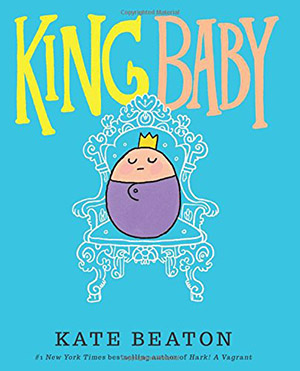 King Baby is a children’s book written and illustrated by Kate Beaton, the creator of the popular webcomic and graphic novel series, Hark! A Vagrant. In this new book, readers meet King Baby. He is a kind ruler, bestowing his subjects – such as his parents, relatives, and family friends – with his utter cuteness and youth. However, he can be a demanding ruler as well, needing to be constantly carried, changed, burped, and so on. It’s hard being King Baby, but someone’s got to do it.

Last year, Kate Beaton published her first children’s book, The Princess and the Pony, which this reviewer had the great pleasure of covering. It’s unsurprising to learn that King Baby is just as good as Princess, though certainly with a different audience in mind. King Baby is meant for much younger readers; whereas Princess had more of a story arc and matched an elementary school student’s reading level, King Baby works well for preschoolers and kindergartners. The language is simple, and the story straightforward. There’s not much nuance to King Baby, and compared to Princess there’s no real takeaway moral of the story. It’s simply a book about the difficulties of raising a child, but with a funny take on the subject matter.

That said, King Baby is still such a worthwhile read. The writing is comedic, much in Beaton’s well-known style, and the illustrations are fun and silly. The book contains lines such as “King Baby will get the thing HIMSELF!” and “These subjects are fools!” and the continual drawings of King Baby are as adorable as they are humorous. It’s a sweet tale that, in the end, is about growing up and no longer being a baby; how eventually a child must set aside their reign and become a toddler. For anyone who’s enjoyed The Princess and the Pony and any of Beaton’s comics, King Baby will serve as a delight as well.