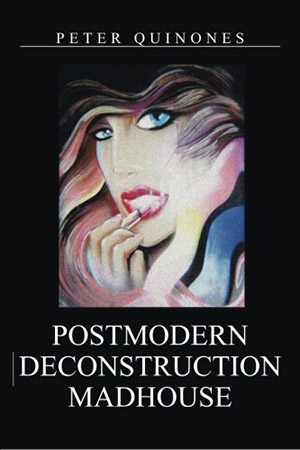 Peter Quinones’ Postmodern Deconstruction Madhouse reads like a set of short stories featuring a variety of different characters with one stand-out character being that of New York City. It features a cast of odd-balls, from Virginia – who is a sapiosexual with her head in the clouds – to Dixie Demando – a woman who describes her existence as ‘eldritch’ and writes letters to long dead starlets:

“Dear Ava Gardner, What a life you lived. I often wonder how many relationships like yours and Frank’s there are around me every day – a lot, I think. But I wonder if your easy mastery of men wasn’t also your downfall, in a way.”.

Quinones’ characterization is what really brings this novel to life, as he erupts right from the start with a bold tone that grabs attention and holds it until the end of each “vignette.” These are characters that are sometimes just going on with their day, or their lives, and he manages to make it sparkle with their outlooks and viewpoints. He drops humorous bits of pop-culture or what can only be described as “New York culture” into each storyline, which makes the novel compulsively readable. These are slices of what feel like life – the characters occupy a space that is completely their own.

The dialogue is sometimes stilted, though it certainly doesn’t detract from how each of these characters present themselves and how they differ so wildly from each other. The prose feels “beat poet” with its sort of stream of consciousness veering, but it doesn’t make readers feel put off by being too difficult to follow. This book is interesting, and its characters are kooky, weird, blunt, disgusting, and maybe sometimes even a little bit evil. Postmodern Deconstruction Madhouse is definitely not for the faint of heart, but it’s worth the read.