The Scourge by Jennifer A. Nielsen 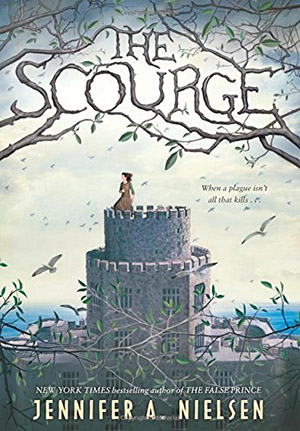 When a disease long thought departed resurfaces, the Colony is created to care for the sick in their final weeks of life. Anyone who tests positive must go there, and no one may return. Tensions between the townsfolk and River People are high, and when Ani and her best friend end up being the first of the latter sent to the island for quarantine, they discover that little about the Scourge – or the Colony – is what they were led to believe. From the isolation of their new home, they must race against time and sickness to uncover the truth.

The Scourge has an engaging premise and an active lead character. Ani is mischievous, brash, and quick to action, which keeps the story moving. Predictability and cheesiness do become issues as the story moves forward, however, and the final chapters will likely feel a little too Scooby Doo for most YA and adult readers. Unrealistic interactions between adults and children as well as an excess of points that feel like “teaching moments” are likely to induce a cringe or two, though these may seem significantly less pointed to younger readers.

Despite its probable confinement to middle-grade audiences, the book isn’t without its virtues: The idea is intriguing enough, and the story itself emphasizes the value of things such as teamwork and ingenuity. The final act hinges on a setting aside of cultural prejudices to work together. It’s also fun to put at the center of this sort of story a girl with a terrible singing voice that she’s happy to use to her advantage. Even with its predictability problem, the book is undeniably a page-turner. Potentially worth a look for those not quite ready for YA yet, but itching for some dystopia-type adventure.