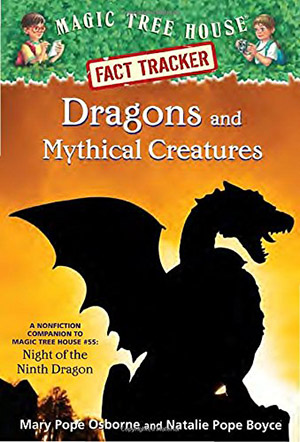 Dragons and Mythical Creatures is part of the Magic Tree House series and is the nonfiction companion to Magic Tree House #55, Night of the Ninth Dragon, which explored the world of King Arthur and Queen Guinevere. Dragons and Mythical Creatures tracks fun facts about mythical beasts and explores how hundreds of years ago, many people believed in dragons and other mythical creatures. Kids will love this companion book because they will learn about fascinating myths from so many different cultures, such as the Iroquois tribe’s creation story about Sky Woman, who lived on a floating island in the sky; stories from the Japanese of water spirits called kappas; and, the Aztec people’s worship of the serpent god Quetzalcoatl. Children will also enjoy the illustrations of dragons, kraken, unicorns, griffins, and mermaids, among other mythical animals.

The book is divided into sections such as “Dragons,” “Animals in Creation Myths” and “Griffins and Other Mythical Beasts,” and also includes a helpful bibliography and places where kids can do more research about these creatures. Another chapter discusses how many of these mythical creatures were based on real animals, and the author also highlights our culture’s continued fascination with mythical beasts such as Bigfoot and the Yeti. Additional games and contests can be found at MagicTreeHouse.com, and young readers will appreciate the in-depth, behind-the-scenes look at the exciting and mysterious world of mythical beasts.