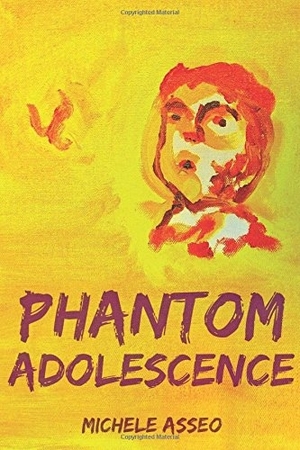 A traumatic loss can drive people to try and find some way to escape from their pain. After her brother’s death, Jeannie abandons her torn innocence with sex and drugs to dull her loss. Her father walks away from his family, unable to face the reality laid bare in their now emptier home. Her older half-brother follows after their dad in order to bring him home, not realizing this journey is his own attempt to flee his pain and personal demons, all while leaving Jeannie’s mother and younger brother to try (and fail) to cope with the shattered remains of what had once appeared to be a happy home.

Phantom Adolescence, by Michele Asseo, is a dark young adult story that discusses very difficult subjects faced by each child of a family. Their struggles range from the loss of a sibling, to self-harm and thoughts of suicide. The beginning of the novel was too overly descriptive and difficult to follow, especially with the author’s choice of words. Another editorial pass would have been beneficial for this early segment. As the characters began to deal with the more serious elements of the story, the writing became much more poignant and powerful. The reader begins to build an image in their mind of who each character is, before and after the loss. However, it isn’t until later in the story that they are truly introduced to each of the family members. Throughout the story we learn who they really are and why they chose to deal with the death in the ways that they do.

After a confusing first few chapters, this is a story that shows how failing to cope with loss can be a destructive journey, but from that journey needed truths might emerge. This is a story that may be a bit too mature for many of the Young Adult audience and may actually be more appropriate for the New Adult crowd based on the maturity of many subjects in the book. The issues the characters are wrestling with are difficult topics that should be addressed despite the discomfort they invoke.