The Sorbonne Affair: A Hugo Marston Novel by Mark Pryor 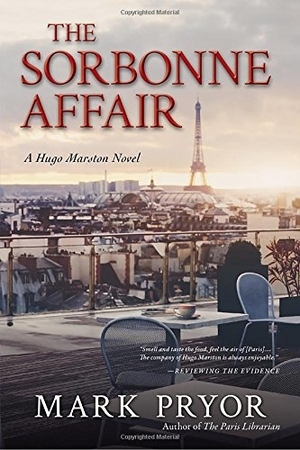 This is a hard-boiled Whodunnit for Whodunnit lovers. In the fashion of Agatha Christie novels and other classic murder mystery books, you’ll have a hard time guessing who the murderer is – or the murderers are – until all is revealed at the very end of the book. If you know and like Mark Pryor’s mysteries featuring Hugo Marston as the main character, you’ll appreciate The Sorbonne Affair. It’s about a famous American writer living in a posh Paris hotel, teaching a few writing students, and living lavishly on her royalties, and on the largesse and the affection of others. When a hidden camera is discovered hidden in her room to film her, it’s not long until people associated with her, with the camera and with the hotel start dying, including one poor fellow who is featured in bed with her in a risqué video that suddenly appears on the Internet.

Enter the American Ambassador to France and the embassy’s head of security, former FBI profiler Hugo Marston, who is instructed to lend the poor rich lady a hand and help the French police figure it all out.

English-born Mark Pryor is a master story teller. He’s also an assistant district attorney who lives in Texas, where he writes the Hugo Marston novels. And, he’s an expert on Paris and the sorts of intrigues that seem to occur there. Books in this series happen there, several of which are plotted around other books and book writers. They include his first Hugo Marston thriller, The Book Seller, and the more recent, entitled The Paris Librarian. Add to them now The Sorbonne Affair. It’s a good one.

If you are into good books, good writing, and hard-to-solve mysteries, you’ll enjoy The Sorbonne Affair; probably all in one sitting. Then, when you’re done, you’ll know Whodunnit.