The Violence of Climate Change by Kevin J. O’Brien 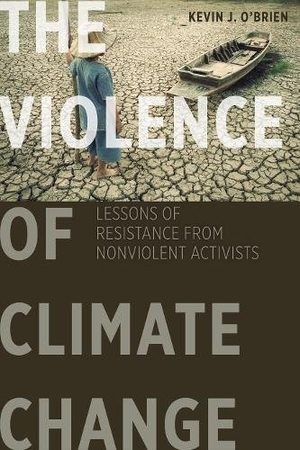 There is certain to be a goodly amount of violence, as commonly understood, associated with climate change. However, as defined by the author, you and I are certainly doing violence by just living our comfortable lives as the world’s consummate consumers. The author’s definition is: Any thoughtless action which harms another, whether human or animal. He holds that the inducements for such actions are structural, that is, built into the society we live in. This reviewer thinks these things qualify: Stockholder value, factory farming, unnecessarily large vehicles, the personal exemption, interest deductions, and unrealistically cheap energy. These are thing that we don’t often think of as doing violence, but I believe they fit the author’s definition.

His definition of non-violence is 1) A commitment to actively oppose violence, and 2) Without the use of violence.

To illustrate what he means, he offers the lives of five non-violent Christians who have made change possible without fists or weapons. They are John Woolman, Jane Addams, Dorothy Day, Martin Luther King Jr., and Cesar Chavez. Each of them resisted an injustice that afflicted those of their day. Among these were slavery, poverty, segregation, and conditions of labor for agricultural workers. Each of these people has a chapter describing what they did and the effects of their efforts, but while they are sometimes inspiring, particularly MLK and Cesar Chaves, as far as the reach of their influence, I am somewhat at a loss as to how their methods, taken together, would strongly curb those interests most responsible for climate change.

The author freely admits that he, like Al Gore, campaigns against climate injustice while participating in the society most responsible for the troubles. He drives a car, flies to engagements, and so on. The irony does not escape him, and he introduces the principal of Moral Finitude: The practical impossibility of living up to our highest ideals, the achievement of which would, in this instance, demand our living as trees, stationary and sustained only by water and sunlight.

Climate injustice is a “wicked” problem, one of manifold problems and problematic solutions. Non-violence conjures a vision of people being bludgeoned and bit by savage Exxon executives and their dogs, without responding in kind. But I think a good start would be voting for those who believe in and are simpatico with climate change amelioration efforts.

The Violence of Climate change is a sometimes interesting and inspiring treatment of the history and effectiveness of non-violence as a means to effect change. If you are more of a hands-on sort, I would like to recommend a complementary book that you can use to promote action while you are resisting: Drawdown – the most comprehensive plan ever proposed to combat global warming, edited by Paul Harken. After reading both volumes, you will be ready to be an effective advocate to change minds and, perhaps, save many lives. For that, The Violence of Climate Change is a worthy read.