With the Valentines’ Day buzz flitting about, Portland Book Review decided to reach out to our reviewers and ask them if they’ve any romances in their favorite reads. So, here are a few romances (old and new) that warm our hearts:

The Princess Bride by William Goldman 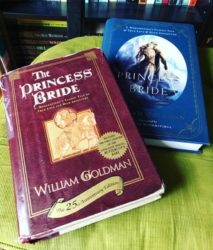 With almost everything in my life, my “favorite” has constantly shifted. My favorite television shows, movies, music, theater, etc. have changed dramatically throughout the years. With that in mind, it’s amazing to realize that my favorite book has stayed the same for going on sixteen years now. At the age of twelve I fell head-over-heels for The Princess Bride. While I adore the movie as well, the book simply cannot be topped. My relationship with the book has changed and grown over the years, but my love for it has never diminished. I feel like relating the plot is a bit pointless since, I mean, who doesn’t know The Princess Bride, right? But just in case: A young girl and a farm boy fall madly in love, but when he perishes in a storm at sea she swears off love, while growing into the most beautiful woman in the world and becoming betrothed to a deceptive prince. When she is kidnapped by a strange trio – who are set to kill her on enemy soil – a man in black appears to save her and revive the love she thought long dead. Obviously, if you are familiar with the plot, this brief summary hardly does the book justice. This novel is filled with high adventure, rhyming giants, determined swordsmen, giant rats, six-fingered men, and laugh-out-loud comedy. What’s more, I always find myself coming back for the romance. Yes, much of this book focuses on comedy and satire, often making Buttercup and Westley’s relationship purposefully silly and over-the-top at times. But the way in which they love each other, swear to always return to one another’s arms, has been a relationship I have cherished from such a young age. One hears the words, “As you wish,” and cannot help but swoon. There are many reasons to lose yourself in The Princess Bride, and the romance of it is truly at the top of that list. 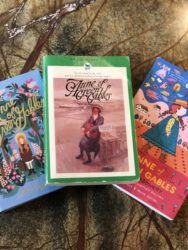 It might not seem a traditional choice, but L.M. Montgomery’s Anne of Green Gables is rife with romance and is one of my favorite novels. I re-read it every year and always discover something new. Don’t even get me started on which is the best televised adaptation (the 1985 version with Megan Follows and Jonathan Crombie, of course!). What I adore about Montgomery’s series is the epic romance between Anne and Gilbert Blythe, which takes years for Anne to fully recognize. During their first encounter, Anne passionately breaks her slate over Gilbert’s head, who had the audacity to call her “Carrots!” in front of their classmates. Gilbert, used to having every girl at Avonlea school pay attention to him, is smitten and spends the rest of the book finding ways of apologizing to Anne. But, she’ll have none of it — crushingly rejecting his proffered pink candy hearts, strawberry apples, and Mayflowers. They develop a fierce academic rivalry (fierce to Anne, at least) and Anne just can’t seem to let go of the terrible first impression Gilbert made. A girl full of passions, she can hold a grudge like the best of them, although she does relent in the end. Personally, I love that Anne is independent, intelligent, competitive, and a true feminist of her time (this was Canada at the turn of the 20th century, after all). She doesn’t rely on a man like many women of her generation had to do — she’s determined to make her own way in the world. While she does eventually find love with Gilbert, it’s on her own terms.

Anne of Green Gables may be more of a coming-of-age story than a technical romance, but I still recommend giving it a read this Valentine’s Day and I’d also suggest continuing with the entire series. It’s truly one of the best love stories ever written.

Pride and Prejudice by Jane Austin 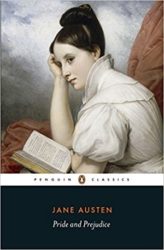 Pride and Prejudice has been my favorite love story for at least the past forty years! The author, Jane Austen, was a literary genius almost 200 years ago. She wrote this love story in light prose, with very direct observations of behaviors during that time period of early 1800s. She wrote with captivating humor and was quite witty. She could be sensitively warm and caring or so caustic with words that penetrated to the core. Austen had no idea that her stories would be read through the centuries and still remain popular even today! Her main theme was love and money and this was represented so clearly with her two main characters, Mr. Darcy and Elizabeth, or Lizzy. He was tall and full of himself, prideful and rude to common folk. She was elegant in her own way, and full of life and laughter. They both were strong-headed individuals. Young girls during her time always hoped to marry well and not become a burden for parents. Lizzy however, seemed to be her own person and not at all worried about her future. It’s fun to notice the changes each one feels for the other as they don’t seem to even like each other at the same time. I love when Mr. Darcy realizes he is smitten with her. This story has it all, great characters and situations of love that last the test of time! It has love and romance and dislike and angst, laughter and tears, hope and lost love. It has my favorite characters and also characters that I disliked, and it’s a love story with a happy ending! 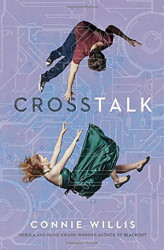 I have a ton of favorite books, but not many of them are strictly romance, so when I thought about my favorite romances in books I’ve read, my brain short-circuited. I could have easily talked about some of my older favorites, proper literature such as Pride and Prejudice or Dracula (one of my favorite books of all time, but again, one with romance taking a supporting role to the horror genre), but what about all my genre favorites? I read plenty of science fiction and fantasy, so shouldn’t some of the lesser known stories get some love? Then my mental filing cabinet settled on Crosstalk by Connie Willis. Crosstalk is a recent favorite, only published in 2016, but immediately claimed a coveted spot on my never-selling-anything-off-this-shelf-no-matter-what bookshelf. Unlike many of my other choices, the main story here does revolve around the budding romance between Briddey Flannigan and C.B., although there is a touch of science fiction via the technology and telepathy involved. Short summary: Briddey has an experimental surgery that accidentally telepathically connects her to C.B., the tech guy who works in her company’s basement, rather than her fiance as intended. Worse, she starts to pick up other people as well. What follows is a fast paced, hysterical read. I devoured this book in a day, despite its 498 pages. Many of my favorite romances in books are tragic, so I can’t begin to explain how wonderful it was to read something this much fun that left me laughing out loud without a matching bout of tears!