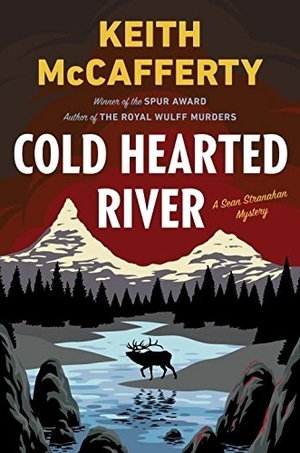 “‘The cult of celebrity is an odd phenomenon,’ he said… ‘Here we are, more than half a century since the man was buried, and we are still enamored of objects solely because he has touched them.’

‘Hemingway. I know the name, but I feel like I ought to know more. Was he a movie star?’”

In 1940, Ernest Hemingway shipped a trunk containing his valuable fishing gear – hand-crafted, imported bamboo fly-fishing rods, hand tied flies, a Native American made creel, and perhaps a manuscript he was working on – by Railway Express to Ketchum, Idaho, where he was a guest at Sun Valley Lodge. The trunk disappeared, either stolen or lost, and was never seen again. Keith McCafferty heard the story from Hemingway’s son, who told him that with the loss of the trunk his father lost the heart to fly fish again.

McCafferty and Jack Hemingway knew each other as co-editors with Field & Stream Magazine. McCafferty, a well-known writer of mystery novels set in the wilds of Montana, took to the story like a fine mountain trout takes to a bright fly, and has made it into a fine novel. McCafferty’s Cold Hearted River (a name that Hemingway is said to have coined) is that story, strategically set in Montana’s Rocky Mountains and down its wild waterways.

Along the way the reader becomes entrapped in the mystery, as bits and pieces of the lost fly-fishing gear start showing up in the hands of locals and outsiders who come to Montana to fish. Strange deaths and murders and a few other odd goings-on alert the law to a problem, and Sean Stranahan – sometime artist, sometime private-eye, and all-time avid fly-fisherman – is contracted to sleuth it out.

It’s a powerful novel, and fundamentally a fishing story, one of McCafferty’s best (and I’ve read most of them). His cast of characters is amazing, and his writing is superb, for McCafferty knows Montana well – especially the locals from all walks of life, including some rough-hewn women and men, some who are strange and lonely, and a few who seem a tad crazy. He paints their lives, and the lush and challenging countryside admirably.

Here’s an example of his descriptive prose. It shows the reader a bit of the mystery’s setting:

There are places in the Rocky Mountains where the rivers flow north, serpentining through lush valleys with the mountains enameled in distant snows, where the spring creeks are as smooth as glass and dimpled with rising trout. There are places where the eye follows the flight of the bluebird and the ear the song of the meadowlark, and it is so serene that you would want to die here, although death in such country seems very far away.

Then, too, there are places in the Rockies where the rivers flow east, foaming and pummeling through hard rock walls, where the dipper bird dives into the whitewater for insect larvae and crows caw and the trees are like spears, and the peaks above them are like the points of spears, and loom close and forbidding. They are places where you wouldn’t want to die but can’t help thinking about it, for death in such country seems quite close at hand.

It makes you want to read the book, then pack up your gear, go to Montana and start fishing. McCafferty has a way with words that lure you in and on, nonstop to the finish; in this case, to a double-barreled finish.