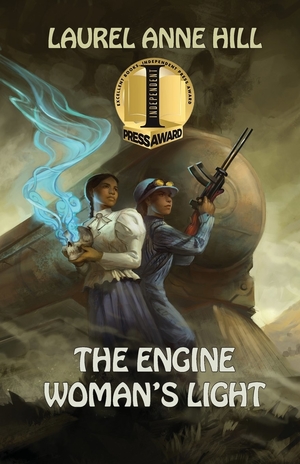 Q. When writing The Engine Woman’s Light, how did you begin? Did the characters arise first, or the world?

A. Two of the characters – the great-grandmother and the infant – arose first, in one of my dreams. The old woman decided to escape the “death train” she rode, in order to carry the baby to safety. Building the world (and the child’s story) came later.

Q. Your book mixes several genres including historical fiction, steampunk, fantasy, and religious fiction. Did you find blending so many genres to be difficult? Is there a particular genre that you find yourself most drawn to?

A. I think of The Engine Woman’s Light as a spirits-meet-steampunk, coming-of-age adventure. The novel blends historical fantasy, steampunk (more of a phenomenon than a genre), and various religious elements. I’m not drawn to any one particular speculative fiction genre. I’m drawn to characters who ask me to write their compelling stories. Their stories determine the genre or mix of genres I use. My main difficulty with writing The Engine Woman’s Light was resolving point-of-view issues. The ghost of a steam locomotive engineer sometimes possesses my protagonist, Juanita, which presented the potential for reader confusion.

Q. The scenes in the book that take place on the trains are some of the most detailed segments in the book. Do you have any experience with trains yourself? What research did you end up doing in the process of writing the book?

A. Obviously, I had to learn how to operate a steam locomotive in order to write The Engine Woman’s Light. This process included years of research and reading, interviewing steam train crew members and mechanics, climbing inside of engines under repair, riding in engine cabs as an observer, and “hands on” student engineer practice. I based the design of my locomotive (#9029) on photos of late 1930s steam-powered streamliners. I also found it necessary to research sections of Southern California’s rural topography, such as the Tehachapi Mountains and the Kern River Pass. The book took me twenty years to complete.

Juanita, my protagonist, finds herself in the world of the brutal and well-armed Mendoza family. Prior to writing my story, I knew little about automatic or semiautomatic weapons. A member of the U.S. Military provided me with a firearm instruction manual. Then I toured the NRA National Firearms Museum to find a gun design I could mentally steampunk. After that trip, I discovered the power of Google. I decided to base the appearance of my fictional rifle on the Villar-Perosa M15, an Italian weapon used during World War I.

Q. Juanita’s dedication to her position as a mystic and to her mission is palpable. How do you think you would have fared in her position?

A. No doubt about it, my still-developing adolescent brain would have pushed my adolescent body to accept responsibility and jump into danger. At age sixteen, hadn’t I climbed a rotting three-story-high clothesline pole so Mom and I could continue to hang out the laundry to dry? Forget the fact that a crossbar had collapsed and I’d been left dangling, to the terror of the entire neighborhood. Inner strength and determination had allowed me to accomplish my job and survive. Yet given Juanita’s extraordinary mission, I probably would have failed if put in her place. Juanita has far more physical strength and coordination than I ever could. Plus, she ultimately gains confidence in her life choices at a younger age than I did. Family spirits gave her gifts that life didn’t hand to me.

Q. Juanita’s heart is torn between her first love, Galen, and Guide, the man who rescued her and protected her for two years. Does Juanita’s decision reflect your own if you had to pick between the two?

A. In early drafts of The Engine Woman’s Light, Juanita’s decision differed from the final product. That was due to author interference. I had to learn to allow Juanita to make her own decision.

Q. Do you have another writing project coming up and are you planning on continuing to write in the world you created in The Engine Woman’s Light?

A. I’m 40,000 words into the first draft of a YA novel set in Mexican California during the Bear Flag Rebellion in 1846. I started writing this story in 2005, when I thought my Mexican ancestors had come to California prior to the Mexican American War. By the time I’d learned the truth, my characters wouldn’t let me change the story line.

Q. What was your favorite part of the writing process for this book? Your least favorite?

A. My favorite part of the writing process was discovering Juanita’s real story and making my writing flow. My least favorite part? Realizing when I’d messed up and needed to start again.

Q. Do you have any advice for aspiring writers who may read your work?

A. Never, ever, discard a failed manuscript. It took me twenty years to figure out how to make The Engine Woman’s Light work. Now my book has won a total of ten awards and honors, including a Kirkus star. My publisher (Sand Hill Review Press) is delighted. So am I.

Thank you, Portland Book Review, for interviewing me and posting your honest review of The Engine Woman’s Light.