Never in Finer Company: The Men of the Great War’s Lost Battalion by Edward G. Lengel 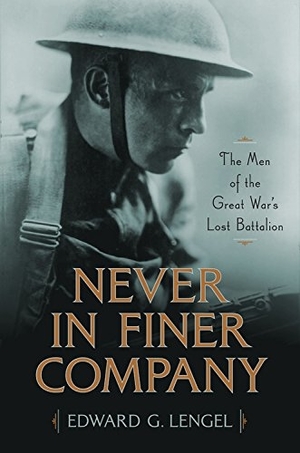 Edward G. Lengel is a military historian whose books have centered on the Revolutionary war, particularly on George Washington, and on World War I. This book is the second with a focus on the American involvement in the battle of the Meuse-Argonne in the north-eastern portion of France. With this book Mr.Lengel has narrowed his attention to the loss Battalion, about 554 men who became isolated during the American attack in the Argonne Forest.

The nucleus of this book is about four Americans involved in elements of the battle, three soldiers and a correspondent. After introduction to the four individuals Mr. Lengel discusses the lead-in to the war and how it impacted each individual. The remaining two thirds of the book recounts in detail the paths of each as the entrapment, the battle to survive, the rescue and the postwar effect of their lives.

The structure of this book allows the reader to “experience” the world as it was before the war. The lives of these individuals prior to the war are explored in detail as their choices and assignments slowly brought them together into the war. The battle and experiences are vividly presented as about 554 men entered the Argonne Forest with ultimately only 194 surviving, all occurring over a seven-day period. The descriptions of this world of war with its smells, sounds experienced and fear felt by the men allows the reader to appreciate the impact on these men of that war. The presentation is not tedious or overbearing with detail, but flows and will keep the reader engaged and interested in these men and their lives.