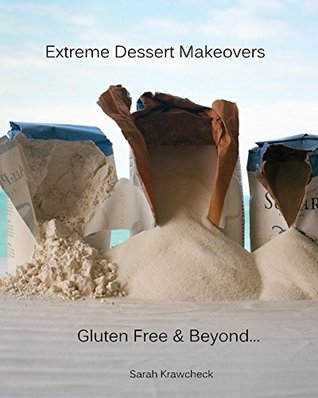 There has been increased awareness of people with special dietary needs in our society in the past several years and with that, an increase in cookbooks and recipes to make gluten-free treats palatable. Author Sarah Krawcheck puts forward her recipes in the cookbook Extreme Dessert Makeovers. The cookbook is billed as a “gluten free and beyond” book with recipes that are also dairy and nut-free as well as many vegan recipes. The book is nicely laid out, has sections for a wide variety of baked goods including bars, breads, brownies, cakes, cookies, cobblers and donuts. Additionally, there is a section on breakfast treats like muffins, pancakes and waffles. There are nice pictures throughout the book highlighting some of the recipes. There is also a very good index for the recipes in the book.

As someone who has been gluten free for over several years, this reviewer was excited to try out some of the recipes in the book. Unfortunately, the promise of delicious desserts was not fulfilled. Two recipes were chosen to try – the standard brownies and the applesauce cake. Of these, the brownie was the most successful experiment. The texture was great, they were very “chocolaty” and they looked and felt like brownies. The taste was so-so, as the flavor of the millet did not pair well with the chocolate. Additionally, the batch needed more stevia to make it sweet. The applesauce cake was much less successful. Despite following the directions, the cake never fully baked in the middle and had a bitter nutty taste. The recipes in the book all have almost the same ingredients with minimal variation. Based on the two recipes tried, it would be expected that the other recipes would likely taste similar to these two and also be unsuccessful as desserts. Readers with special dietary needs who are looking for delectable desserts should look elsewhere because they will not find them in Extreme Dessert Makeovers.